Dreamed into existance by a Beholder, jealous of the physical might of the owlbear, these predatory, floating hunters are feared by their creators and by adventurers who dwell too long in a Beholder's lair deep in a haunting forest.

Spherical Bear. The confusing shape of an owlbearholder often causes those who look upon them for the first time to lower their guard in bemusement, but this is almost always a mistake.

When Beholders dream, their visions become reality, this is how new Beholders claw their way into existance. But occasionally, when a Beholder dreams in a densely wooded location, the sounds of the forest will press in on their dreams and cause them to have visions of the creatures that live there. Naturally paranoid, these dreams quickly turn into nightmares of being hunted and chased. Beholders deem all other creatures weaker, and lesser than themselves, so to truly fighten a Beholder, it's nightmares contort these creatures into more potent, and Beholder-like forms, which pose more of an instinctive threat to their existance...and thus a spherical owlbear that shoots rays from its eyes can be produced.

Lightning?!? Why would a Beholder fear a creature that can't even shoot lazers from its eyes? The dreams that produce Owlbearholders are often terrifying nightmares that cause the aberration to awaken in a cold sweat. These dreams are often most vivid during thunder storms as the boundries between realities flare wildly with the influx of electrical energy striking the ground. The sound of this thunder warps the beholder's dreams and sees these nightmarish visions becoming infused with electrical energy when they are born.

Wary Beasts. Owlbearholders are a fusion of Owlbears and Beholders and as a result are not neccesarily evil. They are aberrations, as they are spawned in the same way as a conventional Beholder , but behave like their Owlbear inspiration and are therefore not inherantly violent.

Their fused form comes with a significant increase in intelligence (what does a Beholder value more than intelligence?), but these creatures cannot talk. They are capable of understanding the languages of their creator, but will generally respond to questions posed to them in a mixture of hoots and growls.

Their increased intelligence is also influenced by the behaviour of Beholders. Beholders cannot imagine other creatures being any less terrified or hostile to outsiders than they are, so as a result, Owlbearholders, although less paranoid, are generally suspicious of creatures trying to get too close to them.

Keen Sight and Smell. This creature has advantage on Wisdom (perception) checks that rely on sight or smell

Multiattack. The Owlbearholder makes one attack with it's claws and one with it's beak.

Oculightning (Recharge 5-6). The Owlbearholder fires a 30-foot arc of pure elecrtical energy from all of its eyes that is 5 feet wide. Each creature in that line must make a DC15 Dexterity saving throw, taking 42 (12D6) lightning damage on a failed save, or half as much damage on a successful one.

This wonderful creature was originally designed by a young man named Wesley Oliver Brown, who's dad (Nicholas) was so incredibly proud of him that he wanted to share some of his son's art with me. Wesley fused his two favourite monsters together and created this crazy creature that I hope everyone can enjoy.

Thank you so much for sharing your art with me Wesley and for enjoying the videos I make on Youtube. I hope that you have a great time fighting or taming Owlbearholders and that your adventures never stop. Creativity is the best kind of magic that any young wizard can wield and you've already honed it to an art form.

Although I consider myself an illustrator, I am by no means a graphic designer and would have no clue on how to priduce a booklet by myself that looked this wonderful. This homebrew was presented due to the hard work of the people at homebrewery.naturalcrit.com and I would highly recommend looking at their work and using this fantastic homebrewing tool if you'd like to make monsters of your own or anything else for 5e!

If somehow, this creature has made it's way to you and you are not a viewer of my videos over on Youtube, I would hate to miss the opportunity to share my work with you. You can find my videos over on youtube.com/arcaneforge where I draw at least one monster per week and talk about their lore, history and mythology as well as all of their real world influences, a pinch of biology and a smattering of linguistics. There's even a timelapse of me drawing and talking about this particular creature, so I hope you'll check it out.

Thanks so much for reading! 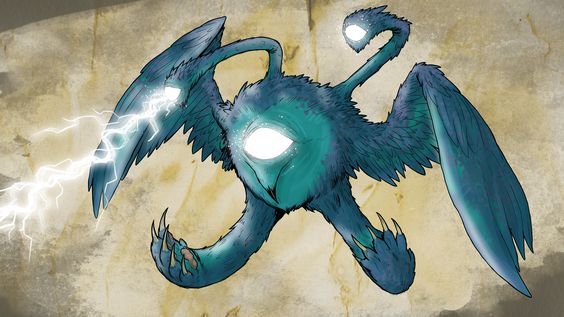