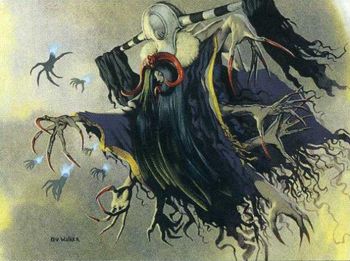 The Myojin of Night's Reach

The Myojin of Night's Reach is one of the five cardinal spirits of Kamigawa. When Ravi rang the Apocalypse Chime in ~3200 AR, she weakened the barriers between many realms. Konda used this to his advantage to steal The Taken One from O-Kagachi in the Spirit Realm, and the theft made Night's Reach aware of the barriers between planes. Using her newfound knowledge, she began to explore other planes where she found she was worshipped across the Multiverse by different names.

Night's Reach grants a number of boons to her faithful. When you enter a pact with Night's Reach, the following spells are added to your known spell list.

Acolyte of the Night

When you select this patron at 1st level, darkness is now your ally. You have Darkvision and are unaffected by magical darkness. In addition, you are proficient at stealth.

At 2nd level, you gain the ability to cast some simple spells using Kanji. You may cast known spells as if you were casting a Spell Glyph using Glyph of Warding. You cast the spell using the desired spell's materials cost instead of Glyph of Warding.

In addition, you gain the ability to cast Alarm this way without expending a spell slot. You also gain the ability to use Animal Messenger this way, except you use a small inaminate object (like a piece of paper or a leaf), which then flies to the target.

Starting at 10th level, Glyph of Warding's casting time is reduced to ten minutes and no longer requires a materials cost.

At 14th level, Night's Reach grants you a simulacrum of her mask, granting you a portion of her power. Any creature can Cast a Spell of 1st through 5th level into the mask by touching the mask as the spell is cast. The spell has no effect, other than to be stored in the mask. If the mask can't hold the spell, the spell is expended without effect. The level of the slot used to cast the spell determines how much space it uses. The mask can store up to 5 levels worth of spells at a time.

If you are wearing the mask when an enemy casts a spell that targets only you, you may use your reaction in order to make a Wisdom Save against the caster's Spell Save DC. If you succeed, you may store the spell in the mask, and the spell has no effect. If the mask can't hold the spell or you fail the Wisdom Save, your AC is reduced to 0, your proficiency bonus is 0, and if an effect would have you roll another saving throw, you instead use 0 as your result until your next turn.

While wearing this mask, you can cast any spell stored in it. The spell uses the slot level, spell save DC, spell Attack bonus, and spellcasting ability of the original caster, but is otherwise treated as if you cast the spell. The spell cast from the mask is no longer stored in it, freeing up space.

This homebrew was created by Jay Annelli using The Homebrewery (homebrewery.naturalcrit.com). Abilities inspired by the Myojin of Night's Reach's appearances in the novels Outlaw: Champions of Kamigawa, Heretic: Betrayers of Kamigawa, Guardian: Saviors of Kamigawa, and Future Sight.