You have dedicated yourself to the beliefs of the Viventus Aes and become a Stroga, a priest or emissary. Your beliefs center around the idea that the gods abandonment of our world means that mortals must rise up and take their mantle. That our flesh is what anchors us to mortality and we, as a collective, must find a way to become immortal; eliminating disease, war, famine, and death for all. You don't nessisarily spend your time spreading the word of your belief, but you follow your creed closely and have been recognized for it.

You display your faith through a helmet-like mask you wear in public. This creation is usually your own and is designed to protect and enhance you. You can use spare parts to remake your mask by using tinkerer's tools to craft a new one over 8 hours with 10gp of supplies plus at least another 10gp for every upgrade you recreate. Once you craft a mask upgrade, you always know how to remake it. Subsequent upgrades aren't limited to your mask. You start with one of the following upgrades:

Your dedication to your beliefs is admirable and those around you can tell through your appearance. As a Stroga, you will find that other Aesists are more willing to help you and trust you, generally treating you as a friendly acquaintance. Additionally, those higher rank than you will know you are capable and doing deeds for them can advance your own standing. They may help you obtain or create more upgrades.

Viventus Aesism offers many strange prospects, but is altruistic at it's core. Their followers are typically intellectually inclined, as their beliefs are centered around the power of the mind, and can easily fall to the oddities of the mortal mind. Many are seen as odd or even insane to commonfolk, as they go on about matters far beyond the present day and it's challenges.

The Aesists believe mortals must create thier way into a utopia using magic and technology. They are responsible for the most advanced creations in Mundus. While they worship no gods, they do follow certain rituals and beliefs: 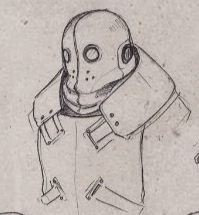 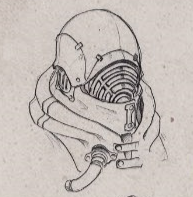 The masks that Viventus Aesists wear is a vital symbol for their organization. Not only is it an easy identifier for those who've dedicated to the cause, it's also a way for aesists to express themselves through craft.

These masks are typically designed by the wearer, although that isn't a strict requirement. As the entire idea of Aesism is centered around the superiority of artifical creations, they must have some practicality to them as well, this is besides the installed upgrades. It is a tool, just like the equipment they use to smith the mask. Basing the minor features on your character's background is perfect for creating a fitting mask for them to don. Features can be taken into consideration for custom upgrades and minor abilities for your character. Here are some ideas for you to consider: