Born from the union of a mighty Dragon and a mortal creature, Half-Dragons are creatures of two worlds, but who truly belong to none. When a Half-Dragon is born, they superficially resemble their mortal parent, but quickly develop features of their Draconic parent, such as long tails, warped horns and talons, scales or sometimes even wings. These physical abnormalities mark the child out immediately as something "other", and will often lead to their abandonment or a collective fear or distrust surrounding the infant. Others will recognise the power that this child may grow to wield and will seek to mould them as a weapon or as an ally. Whatever the comminitie's decision, a Half-Dragon is a rare but powerful creature and their lives will be marked with strife and adventure.

Half-Dragons owe half of their genetic material to a powerful Dragon, who's apperance, nature and magical nature eminently shapes their offspring. In the early days this may simply display as an affinity for their Draconic parent's environment; a half-white Dragon might only feel at home in frigid wastelands for example, or a half-red Dragon might make their home underground where the world is warmer. As they grow however, they will begin to display more of the physical signs of their Draconic parent, potentially becoming unrecognisable as a member of their mortal kin. They will also develop strong personality 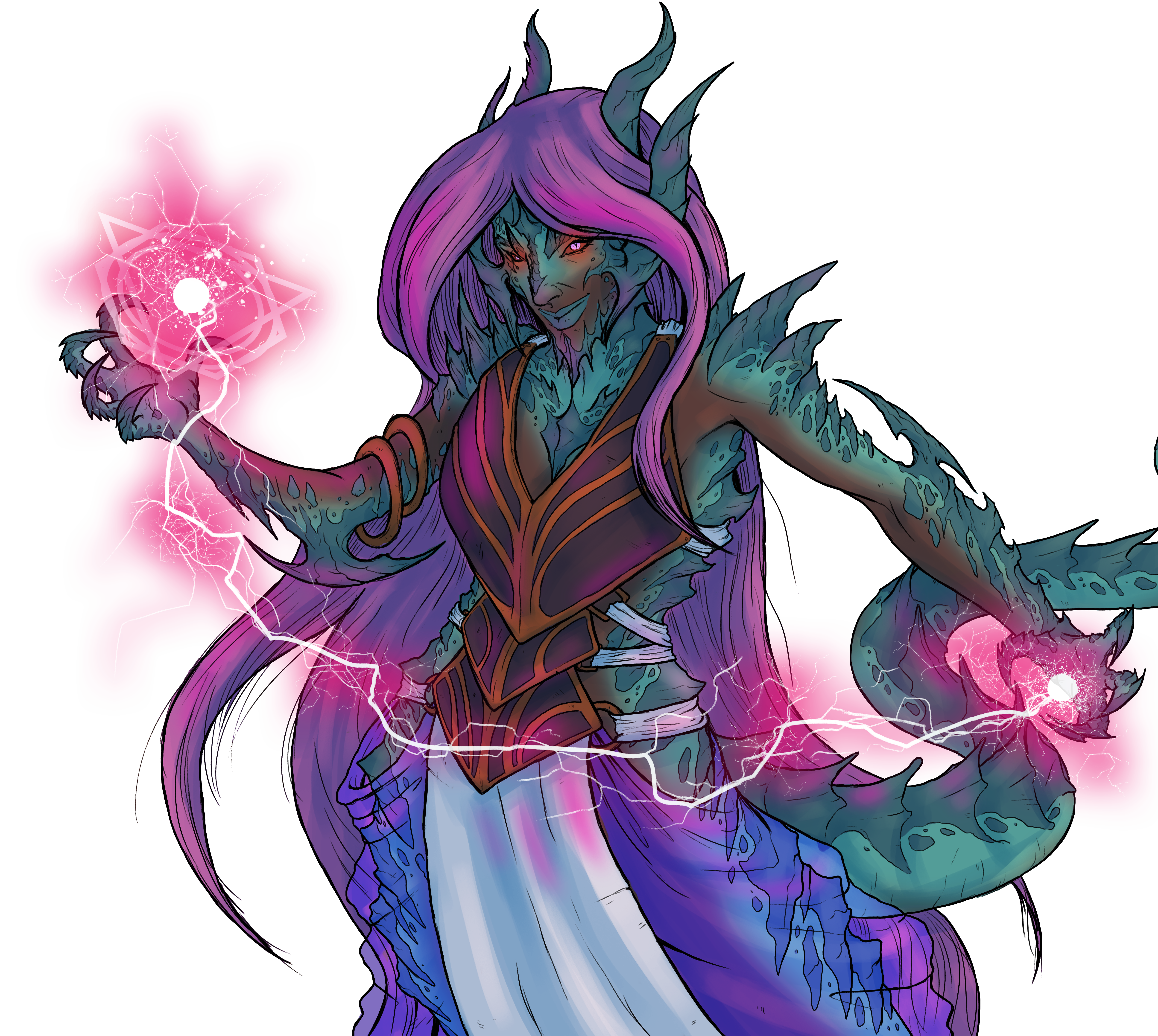 traits associated with their immortal parent. A Half-Dragon born to a Red Dragon may for exaple become obsessed with hoarding treasure...just like many adventurers!

Just as important to a Half-Dragon's form is their genetic matreial of their mortal parent. Due to a Dragon's mysterious and magical nature, their hybrid offspring can be born to any species, humanoid, animalistic or even monsterous, but the most commmon are those who display admirable traits and a similar level of intelligence to the donor dragon.

Dragons only very rarely fall in love with a mortal creature, and so their Half-Dragon offspring are extremely rare, but they may choose to create such a creature in order to have a spy among the mortal races of the world.

Your Half-Dragon character has the following racial traits.

Age. Half-Dragons age at a similar rate to their mortal parent and reach physical maturity at an identical age. Their minds however, awaken almost from the moment of their birth, and are able to speak at least one language from the age of 1 year old. They tend to no longer show signs of aging once they reach maturity, but will live for almost 500-800 years old.

Alignment. The Alignment of a Half-Dragon varies immensely. Those born of a Chromatic Dragon tend to have an Evil alignment, those born to a Metallic Dragon, leann toward a Good alignment and those Gemstone or Crystal Dragons are more likely to be Neutral. However, the life that a Half-Dragon leads, and how people treat them will dramatically influence this.

Size. Your size as a Hal-Dragon is determined by your mortal parent's species, but you will likely count as a Medium creature.

Languages. You can speak, read and write Common as well as Draconic.

Draconic Blood. Your Draconic parent's mark on you is demonstrated in more than just your scaly skin; their elemental nature grants you powerful, magical warding against certain types of damage. Choose one type of Dragon from the Draconic Ancestry table. Your damage Resistance are determined by the Dragon type, as shown in the table.

Subrace. Half-Dragons are potentially the most varied creatures to be born with human-like intelligence, both in terms of their personality and physical apperance, but they can be broadly categorised into one of the following Subraces. Choose one of these subraces: You are either a Beguiling , Juggernaut or a Wrathful Half-Dragon.

Terrifying Presence. While you may not intend to frighten those around you, you can call upon the horrifying atmosphere that your Draconic parent inspires. You have Proficiency in the Intimidation skill.

Draconic Wings. You sprout draconic wings. With your wings, you
have a flying speed equal to your running speed if you aren’t wearing heavy armor and aren’t exceeding your
carrying capacity.

Shape-Shifting. Like your Draconic parent, you have the ability to alter your form to better fit in with your mortal kin.

You transform your appearance. You decide what you look like, including your height, weight, facial features, sound of your voice, hair length, coloration, and distinguishing characteristics, if any. You can make yourself appear as a member of another race, though none of your statistics change. You also can’t appear as a creature of a different size than you, and your basic shape stays the same; if you’re bipedal, you can’t use this feature to become quadrupedal, for instance. This transformation lasts for 1 hour. At any time before this effect ends, you can use a bonus action to end this effect on yourself.

Once you use this feature you cannot do so again before you finish a short or long rest.

Elemental Talons. You either grow retractable claws from the tips of
your fingers, or may use this ability to perform a powerful bite. Extending or retracting the claws
requires no action. The claws are natural
weapons, which you can use to make unarmed
strikes. If you hit with them, you deal slashing damage equal to 1d4 + your Strength modifier,
instead of the bludgeoning damage normal for
an unarmed strike. If you critically hit with this attack, you may deal further damage who's type is listed as a part of your heritage in the Draconic Ancestry table. This damage equals half your level rounded down (minimum of 1).

Scaly Skin. Due to your jagged skin you are ill-suited to wearing armour. Your scales provide ample protection, however; they give you a base AC of 17 (your Dexterity modifier can only improve this number by a maximum of 1). You gain no benefit from wearing armor, but if you are using a shield, you can apply the shield's bonus as normal.

Breath Weapon. You can use your action to exhale destructive energy. Your Draconic ancestry determines the damage type of the exhalation.

When you use your breath weapon, each creature in a 15 foot cone (originating from your mouth) of the exhalation must make a Dexterity saving throw. The DC for this saving throw equals 8 + your Charisma modifier + your Proficiency Bonus. A creature takes 2d6 damage on a failed save, and half as much damage on a successful one. The damage increases to 3d6 at 6th level, 4d6 at 11th level, and 5d6 at 16th level.

Elemental Affinity. When you roll damage for a spell you cast, who's damage is the same time asociated with your Draconic Ancestry, you can reroll any roll of 1 on the damage
dice, but you must use the new roll, even if it is
another 1.

Although I consider myself an illustrator, I am by no means a graphic designer and would have no clue on how to priduce a booklet by myself that looked this wonderful. This homebrew was presented due to the hard work of the people at homebrewery.naturalcrit.com and I would highly recommend looking at their work and using this fantastic homebrewing tool if you'd like to make monsters of your own or anything else for 5e!

If somehow, this creature has made it's way to you and you are not a viewer of my videos over on Youtube, I would hate to miss the opportunity to share my work with you. You can find my videos over on youtube.com/arcaneforge where I draw at least one monster per week and talk about their lore, history and mythology as well as all of their real world influences, a pinch of biology and a smattering of linguistics. There's even a timelapse of me drawing and talking about this particular creature, so I hope you'll check it out.

Thanks so much for reading!