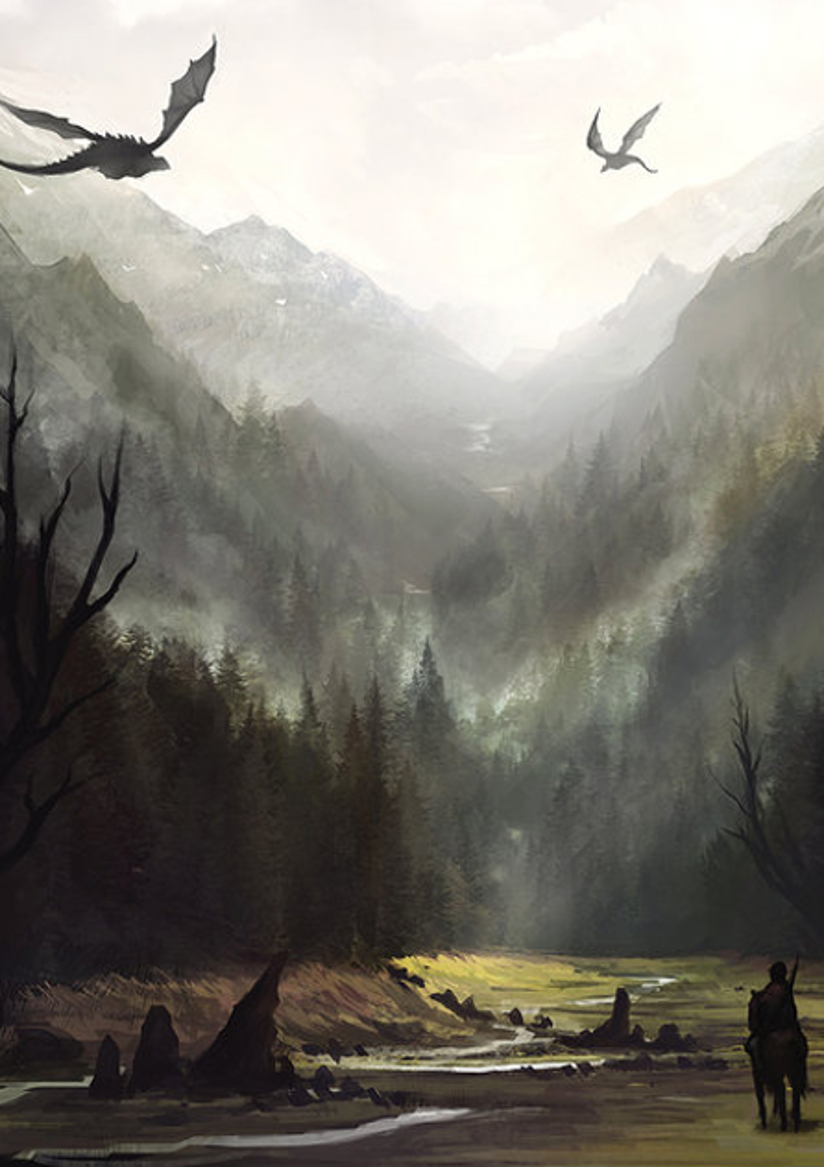 Within the standard 5th Edition ruleset, there's very little space given over to the 'third pillar' of the game experience - exploration. Many DMs will either gloss over extended travel with nothing more than evocative narration, or simply craft their campaigns to avoid having to deal with it in the first place.

These rules are intended to provide a way for DMs to include epic quests and gruelling journeys, where simply getting from A to B is a feat in itself.

The classic dungeon crawl is as old as D&D itself, and many an adventure is built entirely around a party's daring delve into a dark demense, in search of fame, fortune and sweet, sweet experience points. This ruleset effectively re-imagines an overland journey as a kind of dungeon crawl, with each room in the dungeon being replaced by a scene on the journey.

The biggest issue with overland travel, from a DM's standpoint, is that the party will be able to get a long rest every night. This means that unless the DM chooses to pack the journey full of four or more encounters every day, the party will be full rested and refreshed for almost every encounter. To correct for this, introduce the following modification:

Variant Rule: Resting on the Road

For the player characters to take a long rest, they must ensure they have at least a basic level of comfort and safety. Comfort requires each character to sleep in a bed, with four solid walls and a roof above them. Safety requires the party to not need to set a watch overnight. Unless both of these conditions are met, the rest only gives the benefits of a short rest. 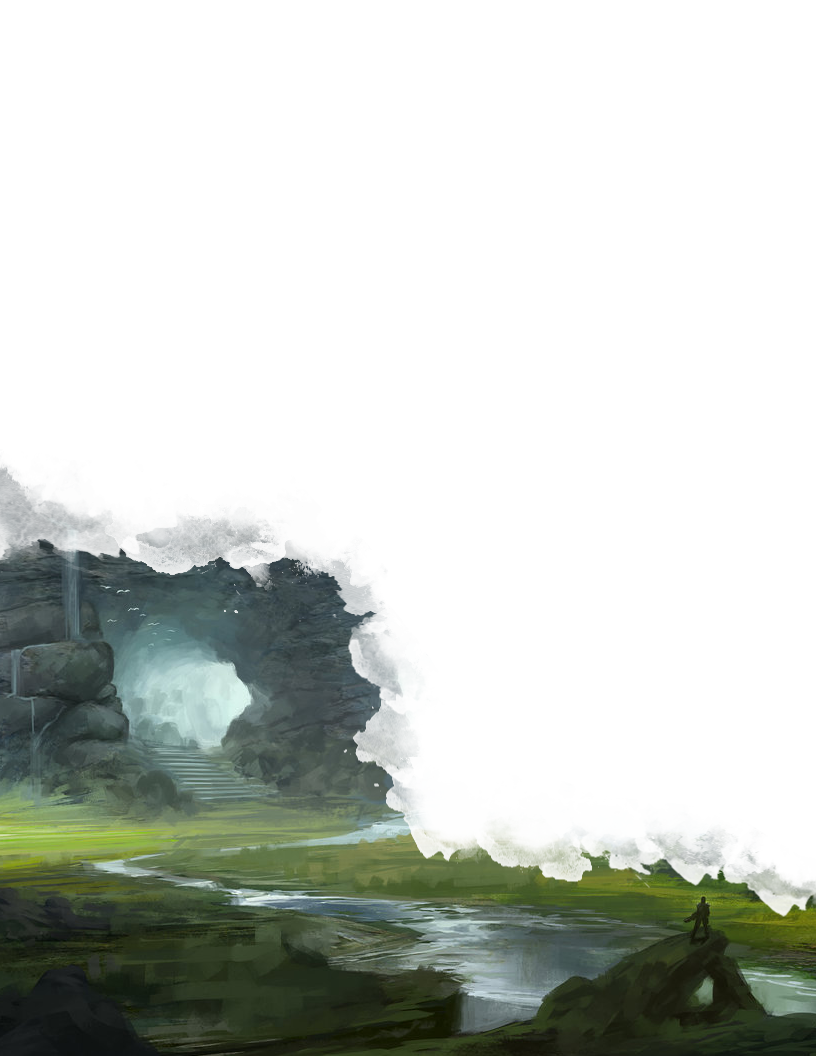 Upon beginning a journey, first determine the route to be traveled, noting the distance and the terrain type. Each type of terrain has a travel speed and a travel DC, as noted below.

Terrain should be classified into one of the types below, which are shown with their corresponding maximum speed and travel DC:

Grassland. Max speed: Medium. Travel DC: 10. Rolling hills, plains, or farmland, potentially with game trails or other pathways. Navigation is by landmark and the horizon, and there are often predators and other dangers to be mindful of.

Forest. Max speed: Slow. Travel DC: 15. Thick woodlands, forests and other areas of heavy tree cover. Navigation can be hard, without paths or trails, and dangers lurk beneath the boughs.

Arctic. Max speed: Medium. Travel DC: 20. Freezing glaciers and snow-covered reaches, far from the grasp of civilisation. Navigation is hard in the snow, and dangers can creep close without warning.

Underdark. Max speed: Medium. Travel DC: 25. A web of subterranean tunnels and subsurface mushroom forests, infested with monsters and precarious empires of drow and duergar. It's easy to be turned around in the Underdark, and even easier to fall victim to one of the many threats.

Each terrain type has its own travel speed, which is the amount of miles the party can cross each day of travel.

Alberic, Bern, Charise and Darius are travelling from the town of Secomber deep into the High Forest in search of a lost temple. It's a long, arduous trek through the huge woodland region, and the group estimate the whole journey to be roughly two hundred miles.

Forest terrain has a travel speed of Medium, which equates to twenty miles per day. This means that the trip should take around ten days of travel.

With the journey duration and difficulty assigned, it can be populated with events. The number and difficulty of encounters the party finds along their quest will be modified according to the party's skill in the roles below, to result in a dynamic, reactive journey.

Remember that not all encounters have to be combat, or even hostile. Think of each encounter as a "point of interest" along the route - an opportunity for the DM to zoom in on the party as they find something interesting, or a potential threat to avoid or confront.

In parties with fewer than four members, each character can fill up to two roles, though if they choose to fill two roles their skill checks for both will be made with disadvantage.

In parties with more than four members, up to two characters can fill each role - in a role filled by two characters, the character with the highest modifier for the check makes the skill check with advantage.

The Navigator is in charge of reading the map, orienteering and keeping the party on-course and on-time. At the outset of each journey leg, the Navigator makes an Intelligence (Survival) check against the terrain's travel DC, with the result affecting how quickly the party can complete the journey.

The Lookout is in charge of watching for danger, alerting the party when bandits or roving predators are near, and keeping an eye out for places or things of interest along the way. At the outset of each journey leg, the Lookout makes a Wisdom (Perception) check against the terrain's travel DC, with the result affecting how many encounters the party will come across along the journey.

The Scout is in charge of assessing the terrain ahead, and steering the party clear of monster lairs and environmental hazards. At the outset of each journey leg, the Scout makes a Wisdom (Nature) check against the terrain's travel DC, with the result affecting the difficulty of the encounters the party will face along the way.

Encounter difficulty is adjusted by the DM using the CR system on page 274 of the Dungeon Master's Guide.

The Hunter is in charge of keeping the party fed and watered, tracking down game animals, searching for fresh water, and monitoring the party's supplies. At the outset of each journey leg, the Hunter makes an attack roll against the terrain's travel DC, with the result affecting how physically draining the trip is.

Alberic, Bern, Charise and Darius are about to set off on their trek through the High Forest, and each of them chooses a role. The forest's travel DC is 15, so they'll each make their checks against a DC of 15.

Alberic, a learned wizard, chooses to navigate. He makes an Intelligence (Survival) check and scores a 16 - a pass. The party will be on-time to make the journey in the expected ten days.

Charise, a cunning rogue, chooses to be the lookout. She makes a Wisdom (Perception) check and scores a 19 - a pass. The party will see two encounters across their ten-day trip.

Bern, as a wise druid, elects to scout. He makes a Wisdom (Nature) check, but only scores a 9 - a fail by 5 or more! The two encounters the party faces, if they turn to combat, will be Deadly!

Darius, a skilled fighter, takes charge of hunting. He makes an attack roll, and scores a 14 - a failure. Luckily, the group brought enough rations and supplies to last them the full ten days, because they're forced to rely entirely on rations as forage and food is little to be found. If anything happens to them, the whole group would be forced to gain a level of exhaustion!

With the journey's real duration determined, and the number and difficulty of encounters along the way decided, all that remains is for the Dungeon Master to combine it all into a cohesive whole.

Should the DM wish, each encounter along the route can be pre-planned in advance. The DM might decide that the party will first wander into the territories of an isolationist enclave of wood elves, before a few days later stumbling across the entrance to an overgrown temple still crawling with foul undead, for example.

This approach works best if there is either sufficient time between the outset of the journey and the actual in-game traveling for the DM to plan out these encounters, or if the DM already has enough worldbuilding detail in place for the region - it allows the encounters the party face to both evoke the foes and themes of the campaign, but also to be carefully crafted for the party themselves.

If the DM prefers, they can simply roll on the random tables found on pages 92 - 112 of Xanathar's Guide to Everything, which are broken down by terrain type and Challenge Rating. As a simple conversion:

For Easy encounters, roll on the table for the level bracket below the players.

For Hard encounters, roll on the table for the level bracket above the players.

For Deadly encounters, roll on the table for the level bracket two above the players.

The DM for Alberic, Bern, Charise and Darius elects to roll for the two encounters the party will face along their journey. The party are level 7, but thanks to Bern's fumbling scouting their encounters will be Deadly, so the DM finds the table for Forest encounters at levels 17+ (XGE p.100) and makes two rolls.

She gets an 18 and a 91 - a herd of unicorns, and an ancient green dragon. She's confident that the good-aligned party won't find conflict with the unicorns, but the ancient dragon is far above their weight class: the four adventurers will have to play their cards right to avoid a potentially lethal fight.

There are some class features or other game elements that can alter how the DM might like to use these rules, which are addressed below.

Characters with the Outlander background. The Wanderer feature states "you can find food and fresh water for yourself and up to five other people each day, provided that the land offers berries, small game, water, and so forth." As such, it is recommended that if the character with this feature takes the Hunter role, they make their attack roll with advantage - their background helps them find what game is around, but cannot help if there simply is nothing to find, after all.

Rangers with Favoured Terrain. The Natural Explorer feature grants a number of benefits which sadly see little use in many campaigns. With this in mind, it is recommended that they apply to these journey rules as such:

PART 3 | PUTTING IT ALL TOGETHER