Oath of the Tender

Paladins frequently fight for those unable to defend themselves. Within the realms of the Humble Forest, the forest, and its' denizens, are often in need of defending. Thus was born the Oath of the Tender, a Paladin oath taken by those that have dedicated themselves to uphold the balance of natural forces.

Tenders of the Scorched Grove

This Paladin subclass builds on beta material available in the Humblewood KickStarter backer supplement, Tenders of the Scorched Grove. Some abilities have come from new feats or subclasses introduced in that supplement. A character taking the Oath of the Tender might also be a member of the Tenders of the Scorched Grove, or might belong to no organized order and just acknowledge a broader acceptance of the tenets of the various Tender orders.

Tenets of the Tenders

All paladins of the tender swear by the following oaths:

Maintain the balance between nature and civilization. Balance must be maintained in order to protect both humblefolk and the natural world.

Watch for threats to the natural world. Tenders are the first responders to natural and unnatural disasters and therefore must be alert to dangers that could endanger the natural ecosystem.

Respect nature’s mysteries. Everything a tender does must be in line with protecting and respecting the natural world. Tenders live by the old adage, leave no trace and give due respect to the wonders and bounties that nature provides.

Protect humble and birdfolk from the effects of natural and unnatural disasters. When disaster strikes, tenders are there to help with the recovery and healing both of the ecosystem and its' inhabitants.

You gain oath spells at the paladin levels listed.

Oath of the Tender Spells

Protector of the Forest

At 3rd level you gain the mend plants・ cantrip which you can cast as a bonus action as a class ability.

・Mend plants is part of the Tenders of the Scorched Grove supplement.

When you take the oath at 3rd level, you are specially trained in magical triage and are able to identify the signs of shock and fatigue in those suffering from injuries. You are always ready to provide aid to those in need. You gain the following benefits: 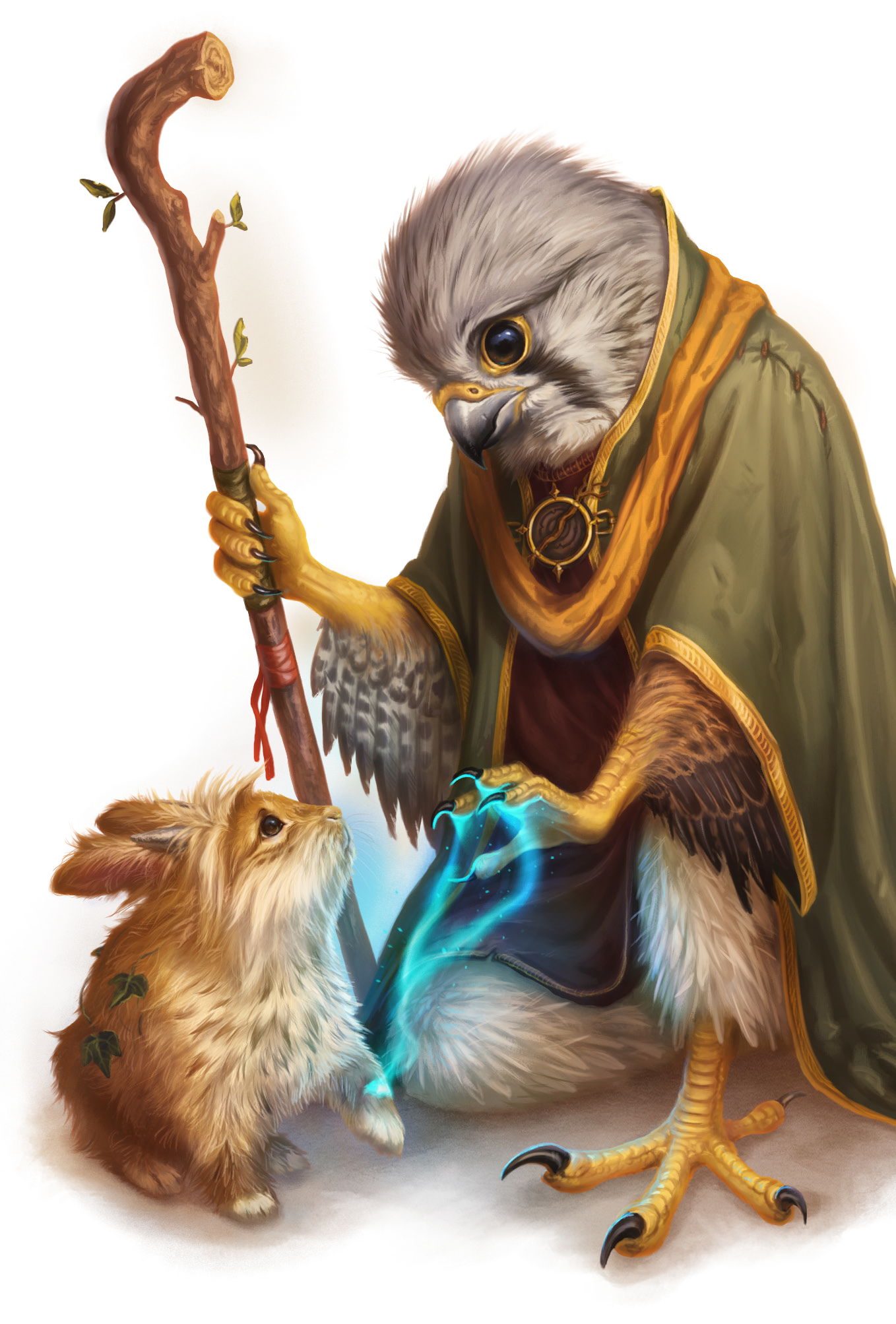 At 7th level, you gain the ability to touch a plant or tree as an action to determine what has occurred to it and the area within its immediate vicinity within the last 24 hours. These events are revealed to you in visions which appear as though you were present as they occurred. After using this ability on a plant, you instantly become aware of its status and health, including any blights or conditions currently affecting it.

Sink into the Forest

At 15th level, you gain the ability to cast pass without a trace as a class spell a number of times equal to half of your proficiency modifier when travelling through an area surrounded by wilderness. You cannot use this feature when traveling through cities or urban areas, or while traveling on any constructed vehicle.

At 20th level, you are able to create a circle of protection around you, your allies, and the surrounding environment as long as those things are organic and not constructed unnaturally. Using your action, you and all creatures not currently hostile toward you gain the following benefits for 1 minute extending in a circle of 30 feet around you for up to 1 minute:

Once you use this feature, you cannot use it again until you finish a long rest.

Drawing on primordial magic, you can instill vitality in nearby plants to create one of the following effects within range:

Oath of the Tender text and concept by Chris Reynolds with heavy influence from Tenders of the Scorched Grove by Hit Point Press, Copyright 2019, Hit Point Press Inc. Authors: Jordan Richer, Christopher Pinch, Andrea Bruce, TR Rowe and Matthew Gravelyn.
Art by Johanna Tarkela and Veronika Fedorova featured in Tenders of the Scorched Grove. This class was written for personal use only and not for reproduction or distribution. No rights reserved or assumed for original Humblewood content by Hit Point Press . 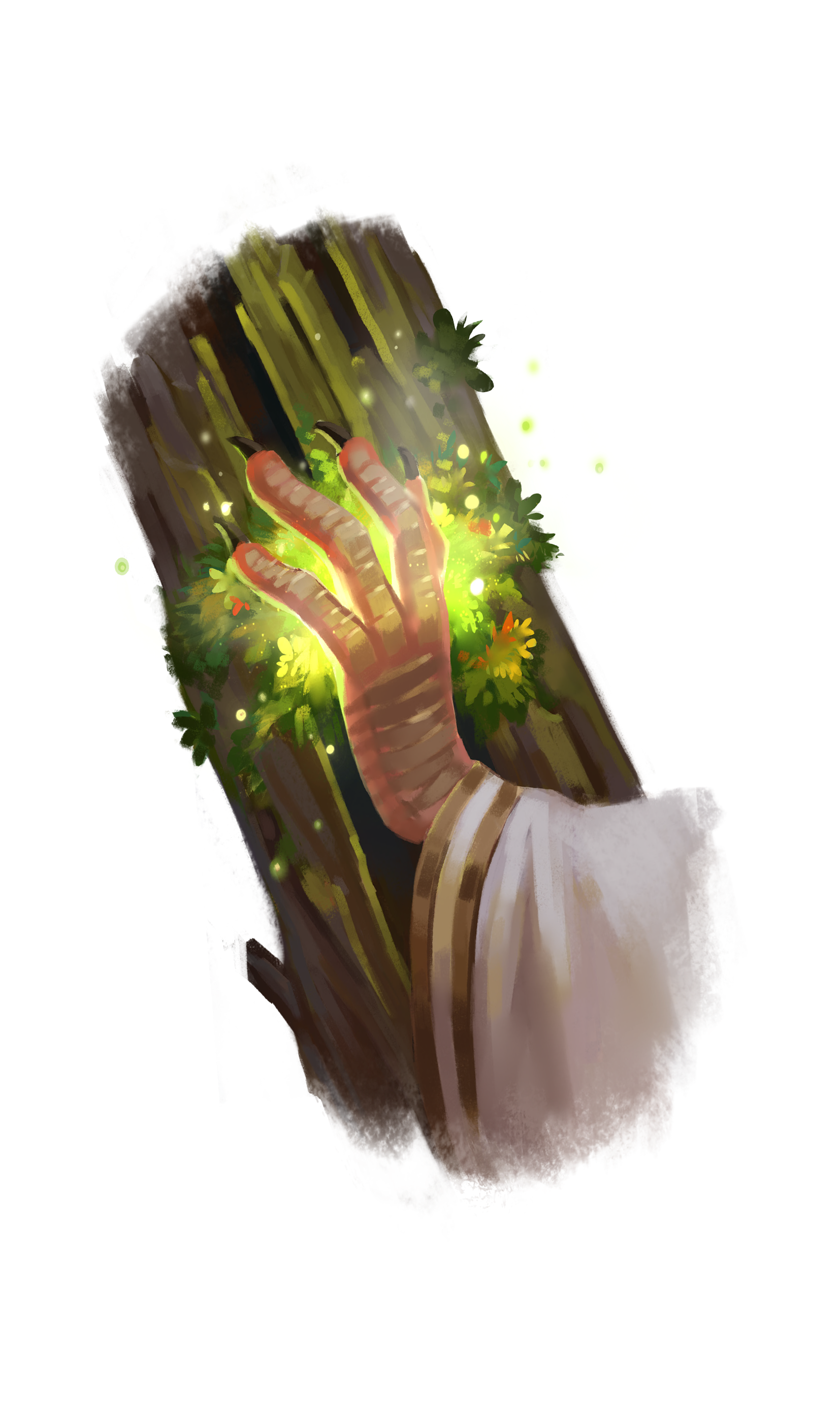