Treetop warriors and practitioners of the druidic arts, the eldenward are some of the first fey to come into existence. They make their lives atop the Feywild, swinging from branch to branch through the thick canopy and living in wandering tribes called primitives, possibly the origin for the word in the Common tongue. They like to think of themselves as above the courts, neither Seelie nor Unseelie, but they are more than often aligned with the Seelie on matters concerning the care of their plane.

Centuries ago, when the Seelie and Unseelie courts came to be, the eldenward ignored the system and continued to protect their homes. That came into question, however, when the displacer beasts escaped Unseelie holding.

The eldenward saw the beasts destroy the natural order of their homeland and, in response, took up the blink dogs that they had spent so long training and drove the displacer beasts back. The Seelie took this as admission by the Eldenward to be on their side, and the Eldenward have been unwilling to do the wrong to prove otherwise.

A Favorite of Displacer Beasts

An eldenward separated from their primitive is known simply as an Elden.

All eldenward are equal within the primitive, and as such those that desire more will leave in hopes of achieving greatness. One such ambition would be the pursuit of arcane magic, a practice seen as unnecessary in the eyes of most eldenward.

Other elden may use this assumption to their advantage. The few elden that are banished from their primitive seek asylum in arcane facilities where they grow in power to exact revenge on the tribe that kicked them out.

Eldenward are named for their jobs, and their names change alongside their occupations within their primitives.

Your eldenward character has the following traits.

Alignment. Close to their primitives and seeing good for the group as good for themselves, Eldenward tend towards the lawful alignments and are rarely selfish.

Size. Eldenward stand between 3 and 4 feet tall and weigh about 100 lbs. Your size is Small.

Darkvision. Accustomed to twilit forests and the night sky, you have superior vision in dark and dim conditions. You can see in dim light within 60 feet of you as if it were bright light, and in darkness as if it were dim light. You can’t discern color in darkness, only shades of gray.

Fey Ancestry. You have advantage on saving throws against being charmed, and magic can’t put you to sleep.

Jungle Living. You have a climbing speed equal to your walking speed and have advantage on checks made to climb.

Heralds of Druidry. You know one cantrip of your choice from the druid spell list. Intelligence is your spellcasting ability for it.

Languages. You can speak, read, and write Common, Sylvan, and Blink Dog. Eldenward bred blink dogs to be the creatures they are today.

Keen Hearing and Smell. The dog has advantage on Wisdom (Perception) checks that rely on hearing or smell.

Hunting Pack. The dog and its handler share a turn in combat, with the handler deciding who acts first on any given round. The handler has advantage on attack rolls against creatures within 5 feet of the dog while the dog isn't incapacitated.

Teleport (Dog's level per short/long rest). The dog magically teleports, along with any equipment or creatures it is wearing or carrying, up to 40 feet to an unoccupied space it can see. Before or after teleporting, the dog can make one melee attack. 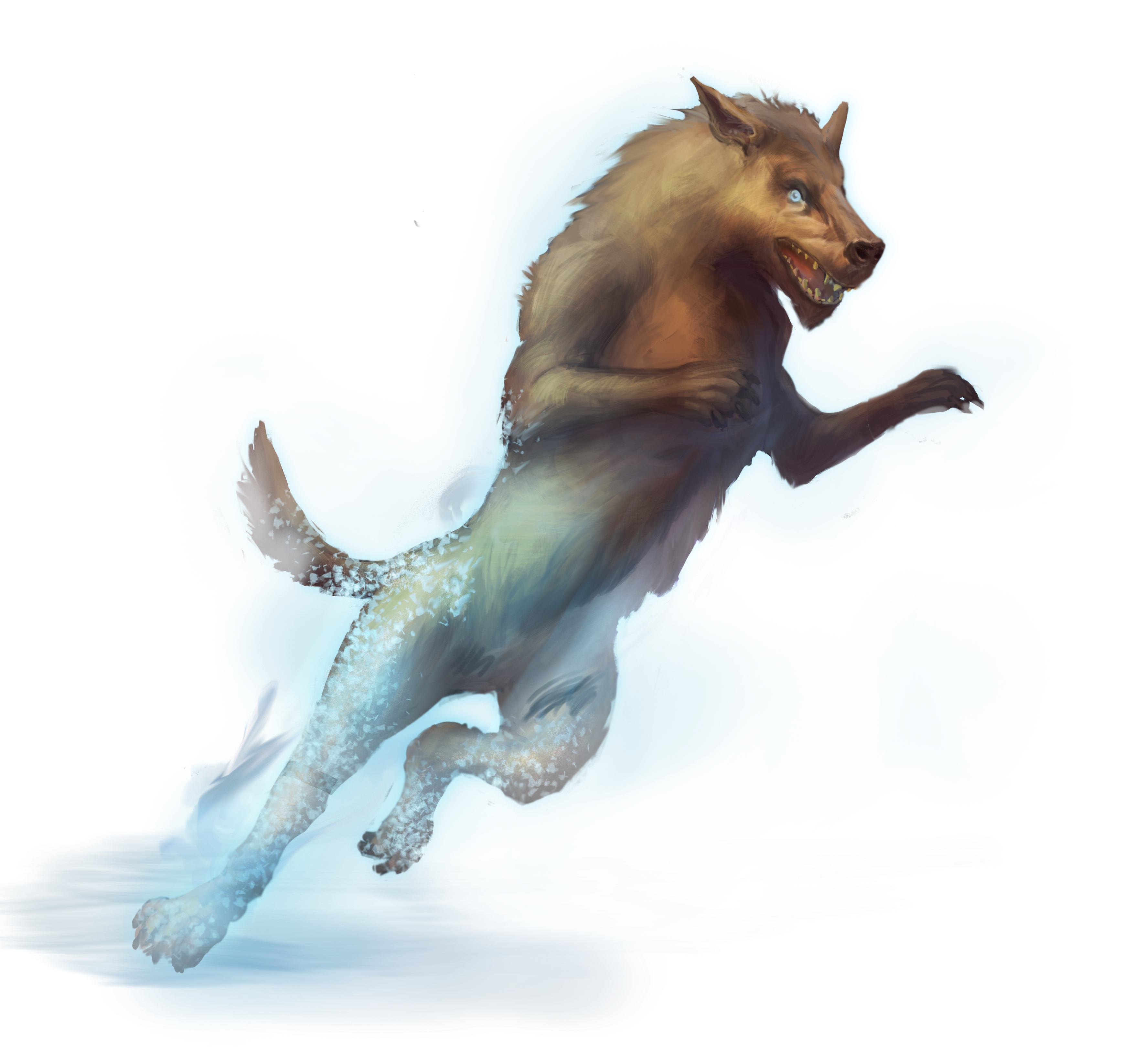 It is said that the first blink dogs were actually the souls incarnate of powerful eldenward, and some eldenward have worked to reclaim this power. The ability to create a blink dog is exclusive to eldenward and strong summoners of fey, but only eldenward can create a lasting example of one such being. With dedication, eldenward are able to hone their mind and innate druidic powers to summon blink dogs out of the essence of their very souls, creating lifelong companions and staunch allies.

You tap deeper into the healing magics of your innate druidic abilities.

While the eldenward's powers may seem druidic in nature, they are actually based in science. Their creation of the blink dog, for example, was selective breeding over generations that infused their bloodline with the magics of the Feywild. They did not befriend the blink dogs, they domesticated them and bred them to be friendly and follow the orders of their handler.

This also explains why they have an intelligence boost and their druid spell uses intelligence as its modifier; they are not contacting spirits or appeasing trees for their power. They have a deeper understanding of the mechanics at work and can duplicate them through reverse-engineering. They are not true druids, they just appear that way.

The eldenward did not fight back the displacer beasts to protect the natural order as their advanced intelligence has placed them somewhat above it. They did so to protect themselves. The displacer beasts were killing the animals in the eldenwards' jungles, depriving them of food and making travel dangerous. The act was as simple as a farmer spraying pesticides onto their crops. The blink dogs were the pesticide.

Eldenward primitives are isolationist and nationalist, meaning that they live for themselves but do not know much of the outside world. Immigrants are ignored not out of fear but out of ambivalence. They do not help a hurt animal, they put it down.

They see the world like most humans do. They do what they do for their own good and sometimes for the good of the community, but rarely ever more than that. Other species, especially ones that do not speak, mean as much to them as a vegetable means to us.

Ignorant of the Arcane

Because they developed a culture based off of an understanding of pseudo-druidic magic, eldenward do not see a need for arcana. It is but a different means to the same end, and therefore a waste of time.

The eldenward not only selectively breed blink dogs, they also selectively breed themselves. At first the most adaptive were bred, then those with an affinity for science, and finally those who could most easily shape blink dogs out of the raw stuff of magic. It is for this reason that all living eldenward, if they choose to learn how, can create their own blink dog.

Eldenward magic is based off of amplification of the innate power within oneself, like ki. This is how they are able to heal through their regeneration feat. The hit die represents their fortitude and their intelligence modifier is how well they can channel the effect.

Eldenward do not look to the gods for help. They bred themselves to where they are now through their own trials and tribulations. Instead, they seek out their own primitive for guidance. They take input from all -young and old, male and female- to make their decisions. If a threat faces them they face it down without the aid of higher beings because they believe themselves above seeking help from outsiders.