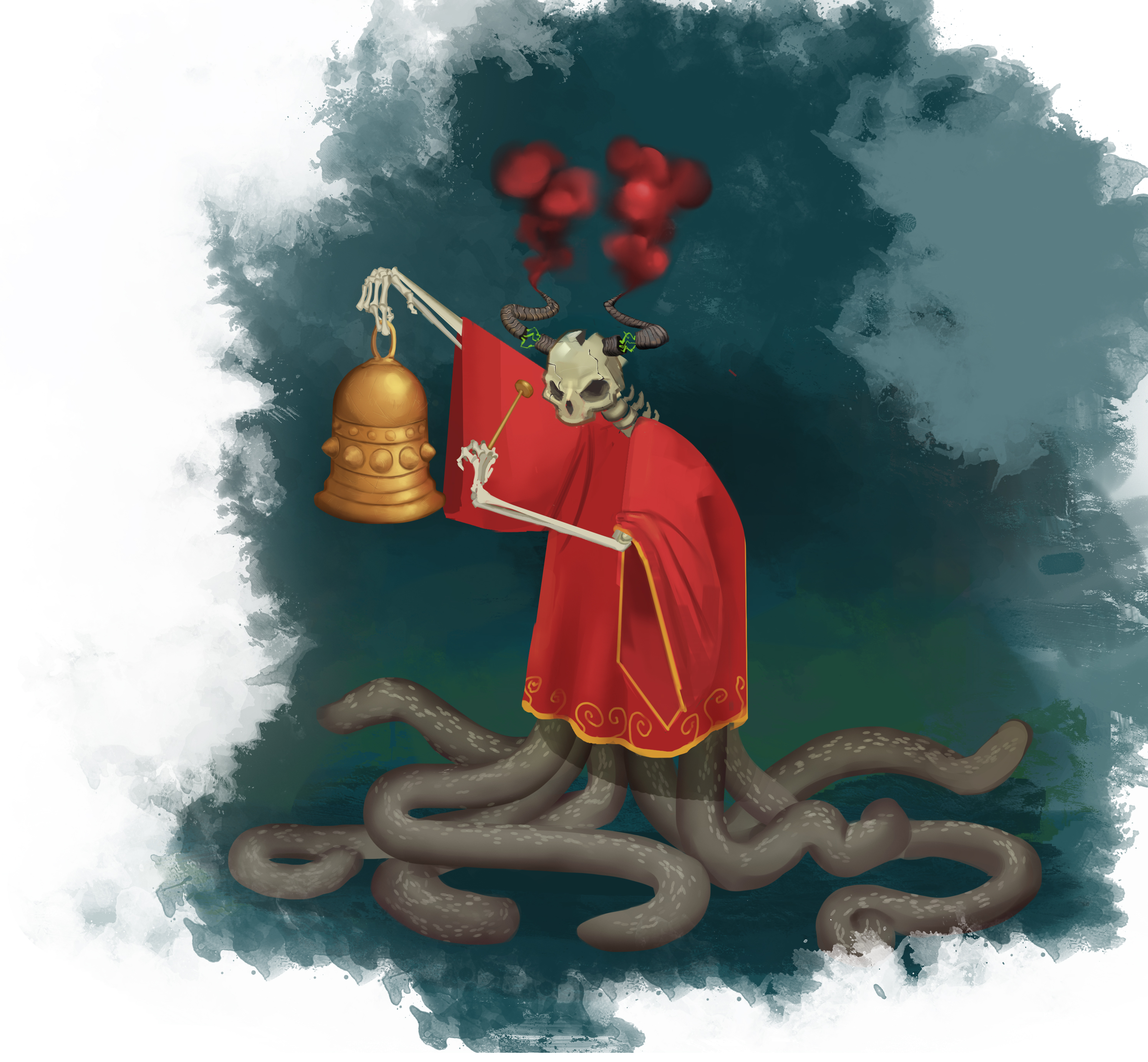 Cyrus, The Bell Ringer of Gondoras

Witihn the streets of the Undead City Of Gondoras, Cyrus stalks through with scores of undead at his behest, searching for those who don't belong. The only thing left of him was his sense of duty and now he only has has one duty. All of his power and deals will be for naught if he fails to meet it. Find every outsider and destroy them.

Once Cyrus finds, or discovers that a PC doesn't belong within the City, he will be relentless in his hunt to find them and destroy them.

Cyrus, The Bell Ringer Of Gondoras

Legendary Resistance (3/Day) . If Cyrus fails a saving throw, he can choose to succeed instead.

Magic Resistance: Cyrus has advantage on saving throws against spells and other magical effects.

Undead Fortitude: If damage reduces Cyrus, to 0 hit points, he must make a Constitution saving throw with a DC of 5+the damage taken, unless the damage is radiant or from a critical hit. On a success, Cyrus drops to 1 hit point instead.

Nauseous Aura: If a creature moves within 5 feet of Cyrus or start its turn within 5 feet of him, it must immediatly make a DC 15 Constitution saving throw save or be poisoned. Creatures affected can repeat their save at the end of their turn. On a success, the creature is immune to the effect for 24 hours. Creatures that are immune to poison or don't need to breath automatically pass this saving throw

Multiattack: Cyrus makes three melee weapon attacks and uses The Bell Tolls For Thee if he can.

Tentacle Whip: Melee Weapon Attack: +8 to hit, reach 10ft., one target. Hit 5 (1d6 + 5) bludgeoning damage and (1d6+5) necrotic damage. Creatures hit are automatically grappled and restrained. Cyrus can grapple up to 8 creatures in this manner. Anyone grappled can their action to make an acrobatics or atheltics check to escape with a DC of 15.

Bell of Gondoras Melee Weapon Attack: +8 to hit, reach 5ft., one target. Hit 5 (1d6 + 5) bludgeoning and (3d8) Necrotic damage. Every enemy creature with 30 feet of Cyrus that can hear the bell as it hits must makes a DC 15 Wisdom save or be frightened. Anyone affected by this can make the save at the end of their turn. If a creature saves against this ability, they are immune to the frighten effect for 24 hours.

The Bell Tolls For Thee (Recharge 4-6): Cyris rings The Bell. Every allied undead that can hear Cyrus, The Bell Ringer Of Gondoras, will be able to move up to double their movment using their reaction.

Move: Cyrus moves up to his speed without provoking opportunity attacks.

Lifedrain: ((Costs 2 Actions)) Cyrus drains the life from one creature he is grappling. The target takes 35 (4d12+5) necrotic damage, and Cyrus regains half as many hit points.