A young traveler walks by a lake clearing at night his view lit only by the moon and stars, A young woman is seen wandering at its shores. In curiosity he decides to follow her due to her enchanting appearance. As he is lead further into the forest following the light of her lanterns he find himself alone suddenly except for a massive fox nine tailed fox standing before him. In fear he runs in a random direction and trips falling unconscious, when he comes to he find himself back in his home with his wounds healed as dismisses it as a strange dream.

A kitsune can shift its from it's vulpine form to a humanoid of their choosing with a single thought. Many Kitsune use this gift as a method to blend in with society, but it’s an invaluable tool for grifters, spies, and others who wish to deceive. This leads many people to treat known kitsune with fear and suspicion.

Kitsune have the tendency to sneak into human villages some play pranks others try to help society by acting as healers, diviners, or spiritualists.

Kitsune tend to fall under one of two categories, the Zenko who are kind and benevolent and the Yako who vary from being mischievous to outright malicious. The Zenko help those in need using their knowledge and skills sometimes acting as leaders in rebellions but more often simply as scholars, healers, or diviners. The Yako however are known to go so far as destroying countries for their amusement by posing as their leaders or those close to them. They will often play pranks in while appearing as someone who as spited them.

The Zenko worship a godess they call Inari she is a god of foxes and harvest they draw their power from her influence allowing them to access spiritual power from their homeland even while in another plane. Without her blessings an Zenko would lose their power and be forced to feed off others to survive causing them to fall and turn into a Yako.

Kitsune learn to shapeshift upon reaching physical maturaty at age 100 and lose that ability upon evolving into a Ninetails between age 800-1000.

In their natural form kitsune are slender foxes with pale fur ranging from orange to white depending on their age, and silver eyes in slits. They have one to 8 tails depending on their level of spiritual power. Upon gaining the Ninth they evolve into ninetails.A kitsune can alter its physical appearance with ease. They frequently use this ability to blend in, deceive others, or simply for vanity.

A kitsune shifts shapes the way others might change clothes. A shape of vanity — one created on simply for the fun of it — is called a Face. A Face can be used to for a prank to change the mood or to serve another simple purpose then is simply discarded and ignored.

A kitsune will take on a hybrid form called a hand in this form they have a slender build with black, white, or gold hair, they have a pair of ears and varying numbers of tails which most often match their hair color. Tribal markings orange tribal markings may be found on their faces.

Finally a Heart is a perfect copy of another's appearance, however a Kitsune cannot access the original's memories, knowledge, or abilities. They may simply take on the form of someone they admired or use it to trick others and play pranks.

A Kitsune might use a different name for each face and hand and will choose the name of the original when using a heart. The true name of a kitsune is kept secret and they will use alias with the same script in general relations. Kitsune names simple and made of one to three short syllables often emphasizing the use of vowels. Names are considered valuable to kitsune and they will not ask for your name nor will they use their own in relations.

While technically genderless Kitsune typical prefer female forms but are willing to pick either role if necessary.

The Kitsune and Ninetails originate from a Plane they call Little Garden, they describe it as being rich with foliage and wildlife and filled with spiritual power. Magic in Little Garden functions on a completely different principle than magic in the Material Plane. It is much close to what those native to the material plane call Ki. Magic in the Material Plane functions by using a fabric of magic to access the weave however in Little Garden magic is fueled by the spiritual power in the atmosphere which is used to create phenomena such as razing fires, shields of great protection, it even conjure solid objects as large as buildings or reshape trees into houses.

There is however a more effective method of gaining spiritual power. By drawing life force and converting it into spiritual power magic becomes many times more potent. As a price using life force instead will kill or severely weaken everything in the users surroundings if overused. Even without life force magic in Little Garden is far superior to that of the material plane.

Your kitsune character has the following traits.

Kitsune are considered to be adults once they reach 100 years and will stay in their fox form until then. Once they become 100 they can freely change their appearance into a humanoid at will including those they have seen before. They typically live from 800-1000 years before evolving into a Ninetails but many are hunted a killed for their tails which are considered good luck charms well before then.

In their natural forms, kitsune are large foxes with 1-8 tails and average between 5 to 6 feet in height, with a slender build. Your size is Medium.

Your base walking speed is 30 feet.

As an action, you can transform into your human for, revert to your fox form, or chose to change one feature from human to fox or vice versa. You revert to your natural form if you die or are knocked unconscious. Your appearance is given away by your reflection.

Even to the most astute observers, your ruse is usually indiscernible. If you rouse suspicion, or if a wary creature suspects something is amiss, you have advantage on any Charisma (Deception) check you make to avoid detection.

When in your true vulpine form your movement speed increases by 10 and you gain Darkvision however you cannot do anything that requires two hands, complex arm movements, or a humanoid form. You can weild small simple weapons like daggers in your mouth but only one at a time. 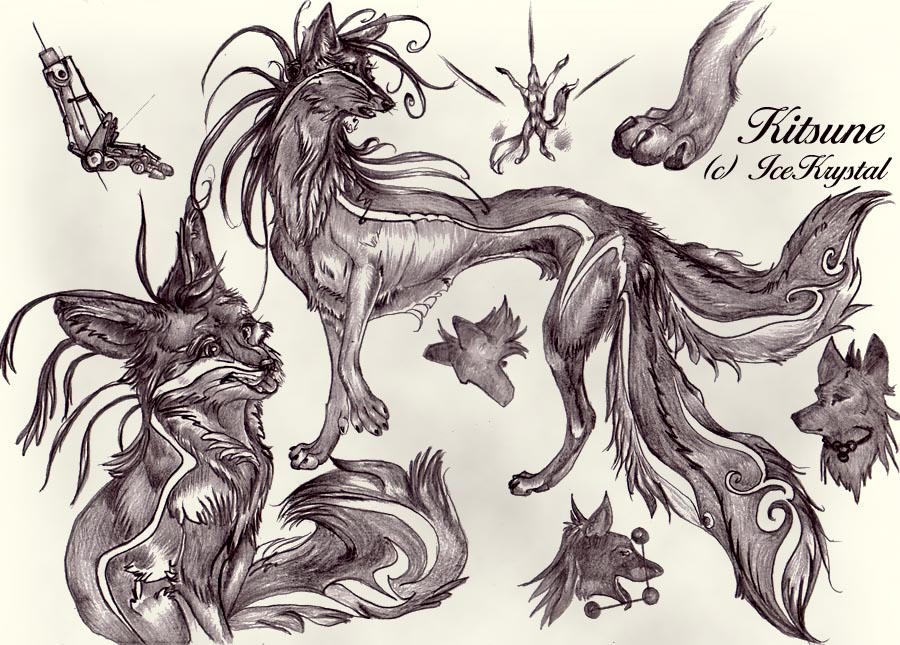 You gain proficiency with two of the following skills of your choice: Deception, Intimidation, Insight, and Persuasion.

When a creature you can see makes an attack roll against you, you can use your reaction to impose disadvantage on the roll. You must use this feature before knowing whether the attack hits or misses.

Using this trait reveals your shapeshifting nature to any creature within 30 feet that can see you. Once you use this trait, you can’t use it again until you finish a short or long rest.

All Kitsune carry a blue orb, the orb is to store spiritual power their soul. They can change the radius of the orb at will from the size of a (insert basketball comparison) to the size of a small marble. They usually keep at it the size of a pednant and wear it around their neck like one in order to keep it hidden. Some may keep it larger or just increase it to examine it from time to time.

After consuming the stored energy a Kitsune must rest to recover. While they can't get tired from lack of sleep the kitsune require to go into a hibernated state to recover the spiritual power required to stay materialized. While the outer film on the orb is exreemly sturdy it is still a delicate object within. If it were to take to much damade or if they ran out of spiritual power, the user would instantly be dragged back to their plane. The orb has a set of markings in Pon which are unique to each kitsune and the intensity of it's glow changes depending on how much power is stored.

You can speak, read, and write Common and Pon.

The Kitsune are eccentric and curious or extreemly logical by nature as such they tend to be considered odd by most mortals. You can choose a kitsune quirk from the quirk table below.

The Zenko are benevolent by nature they value wisdom and intelligence and are capable of using their connection to the goddess Inari to gather spiritual power from their home world while resting.

Unlike the Yako who rely on trickery the Zenko rely on their wisdom and intelegence giving them a 1 point bonus to their inteligence ability score.

Your connection to Inari allows you to access your home plane remotely in order to restore the spiritual power stored in their orb. They must be resting to do so. The Yako are cruel and merciless. They enjoy using their beauty to lead travelers astray to feed off the life force or simply leave them to die. Those who get led astray will find themselves lost in a dangerous or secluded location so that no one will hear them scream for help as their life force is slowly drained dry or when they find themselves surrounded by monsters.

The Yako shun Inari and her teachings thus they cannot use her power to access Little Garden. Instead they restore their orb by gathering life force from the their surroundings. This requires large amounts of concentration so it can only be used while resting.

The black forest is a labyrinth which swallows all light, is filled with unspeakable horrors, as well as a dark energy which is poison to those unaccustomed to it. Black Forest residents are Kitsune born there. They all were once Yako or Zenko and tend to follow the same philsophies, however they ended up losing many of their original abilities and gaining new ones to combat the harsh envirmoent of the Black Forest. They are more adept at surviving in difficult enviroments than other Kitsune and have evolved very differently. They cannot transform and stay perpetually in their hybrid form. They also have colorless skin and hair with red or orange eyes.

Due to prolonged exporsure to the dark energy of the Black Forest it permeates your skin. You have an AC of 13 + Your Dexterity modifier that acts as natural armour.

You are forced to constantly have your guard up you gain proficency in perception.

The black forest swallows all light, you can perceive virbations in your surroundings without relying on eyesight within 20 ft but are blind outside of that range

Your skin and hair have no pigment and are pure white, as a result it's hard to concentrate when you are in direct sunlight, you have a disadvatage to attack rolls and rolls that involve using magic.