Among the tallest specimens of giantkind, jungle giants live deep within the jungles of the world, feeding their insatiable carnivorous hunger with the flesh of any living thing available. They are lanky and long lived cunning hunters who pose a terrible threat to the unlucky living creatures who happen to cross their path.

One With The Jungle. With their wavy green hair and pale yellow skin, the mighty jungle giants easily blend into their sorroundings. Jungle giants wear as little clothing as possible, caring little for modesty. Their long bodies are usually adorned with tribal tattoos, and many use sticks, mud and leaves to cover themselves when hunting especially large or wary prey.

Resourceful. Jungle giants always carry everything they need to survive: tools for making and maintaining their weapons, fire-starters, tinder, and mundane items such as scraps of fur and hide, dried insects, and bones. Every jungle giant also carries a quiver of poison-tipped arrows.

Ravenous appetites. Jungle giants will consume the flesh of any type of animal or beast, regardless of size. They know how to kill and prepare everything from the smallest birds to the largest predators of the jungle. Their villages are a testament to their carnivorous ways; greased animal hides stitched together with intestines cover their crude huts, and the smell of smoking meats hangs in the air. A telltale sign of a nearby jungle giant village is the buzzing sound of swarms of flies attracted by the carcasses of animals brought back from a hunt.

Occassional Allies. Jungle giants are perhaps the friendliest of the giant species, and are known to cooperate with human tribes on hunts if it can be beneficial. They maintain friendly relations with fey and with primitive woodland beings who enjoy the same hunting lifestyle as they do. 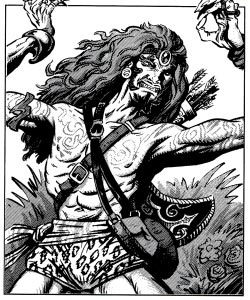 Ambusher. The giant has advantage on attack rolls against any creature it has surprised.

Jungle Camouflage. The giant has advantage on Dexterity (Stealth) checks made to hide in the jungle.

Giant Longbow. Melee Weapon Attack: +5 to hit, range 60/240ft., one target. Hit: 18 (2d12 + 5) piercing damage and If the target is a creature, it must succeed on a DC 12 Constitution saving throw or be paralyzed for 1 minute. The target can repeat the saving throw at the end of each of its turns, ending the effect on itself on a success.